It is likely that the first Kat and Mouse confrontation was drawn at the bottom of The Dingbat Family page simply because Herriman had time left in his eight-hour day and, remembering the success of Gooseberry Sprigg, wanted to add a bit more to the strip. In Herriman's words, Krazy Kat was created "to fill up the waste space."

Krazy Kat was born as a part of The Dingbat Family. Since 1910, Ignatz and Krazy are playing in the Dingbat's backyard. By the end of the year, the Kat and Mouse were divided from The Dingbat Family by a ruled line. It even replaced the main strip on some occasions and was then named Krazy Kat and Ignatz. At last on October 28, 1913, Krazy Kat was a completely independant strip.
During this period, the strip was a simple cat and mouse game reversed. Ignatz was chasing Krazy. Everything that could get thrown to the kat's head was! The strip was a pure slapstick. About a month later, Krazy felt in love with Ignatz. The situation was becoming more absurd!

From 1913 to 1916, Krazy Kat was only a daily strip. It's very hard to gather informations on this specified time of the strip since I've seen so few reprints of this period. The graphics evolved a lot and I see no trace of Ofissa Pupp. 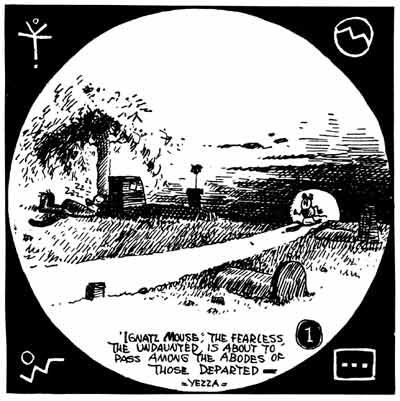 In 1916, Pupp is just a regular Coconino citizen, as Kwakk Wakk, Joe Stork, Don Kiyoti, Beau Koo Jack, Kolin Kelly, Don Kiyote and all the rest. His duties are to stop thieves. If he's not yet determined to put Ignatz into jail for each brick, we can see the evolution beginning as Ignatz is always trying tricks and get sometimes caugh by Pupp. These early times where the strip was a poetic delirium all along lasted until the mid twenties. See some samples on this page.

Then (in the mid 20s) those bricks and tricks began to really bother Pupp. Some strips already ended in the prison. And as soon as the early 30s, Ignatz ended half the strips in what had become its natural habitat: Jail. During the same time, the dailies were filled with longer narratives. Stories were continuing through days, sometimes lasting several months.

In 1935 began the Color series of Krazy Kat.

In 1938, Herriman added a thin horizontal runner panel along the bottom of the page. These drawings were independant mini-stories or comments of the story above. The attentive reader will remember that this is the way Krazy Kat was born.